Skip to content
Home/Interviews/Dave Brown: “I literally just showed up in the jungle”
Previous Next

Dave Brown: “I literally just showed up in the jungle” 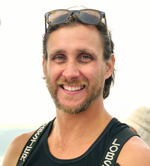 Dave Brown is a freelance writer-photographer, currently living a minimalist-nomadic life between remote Central America and Austin, Texas. His writing, which ranges from travel to outdoors to men’s work, has appeared in The Good Men Project, AAA Travel guides, Generate magazine, KillingTheBuddha, and other outlets. He blogs at The Restart Experiment.

How would you describe your Nomadtopia?

While I’ve been heading toward a “different” life for some time, I’ve really been a full-bore nomadic minimalist for the past year or so. In that time I’ve given away or sold most of my possessions and lived in the jungle of remote Central America and on the road in a truck camper, traveling all four corners around the U.S. and Canada.

I’ve seen so many beautiful places and met many wonderful people that illustrate just how incredibly awesome our world is. I’m currently back in the jungle for a couple months. There are some changes in the works, but the minimalist-life-pilgrim ethos remains.

What was the impetus for making the change, and how long did it take to make it happen?

In 2012, I had a series of major life events that caused me to re-evaluate my priorities, including the death of my father, divorce, and job loss. I tried to maintain the “normal” perspective of holding down a corporate job and living “responsibly,” but that perspective just could not hold water for me any longer.

Some time after losing my job, I realized I had nothing more to lose, and conventional logic wasn’t proving satisfactory, so why not just follow my intuition? I had read about saving up for years to make a dream happen, and phasing into a different way of living, but mine was a case where I felt that if I didn’t just jump off the cliff, I may never fly.

I weighed my options, figured that the worst that could happen was not much worse than my then-current situation, and jumped. Got rid of almost all of my possessions, bought a plane ticket, and just… left. I had no long-term plans, and not many short-term plans either. I literally just showed up in the jungle, made friends, and have gone from there.

I started out with the idea to experiment with the practicalities of living the life I really wanted (that’s even the tagline for my blog), beginning with the assumption that I knew what I wanted, and where I was headed. With time to breathe and process, my priority has adjusted to more deeply understand not the practicalities of living a certain way (a nomadic life, for instance), but what is at the very core of my desire for life, and how to uncover such truths… not just how to live a certain way.

What do you miss most that you couldn’t bring with you?

Community. It takes time to develop community. It’s far easier to amass resources and start living a certain way in any particular place than it is to re-create community in your life.

What is the most challenging aspect of this lifestyle? What’s the most satisfying?

Again, community. A nomad is a sort of voluntary exile who chooses to leave their home village, for whatever reason or goal. The lack of a home village can present challenges with loneliness and even depression, so it is crucial to find trustworthy, open people to talk to and share life, if even temporarily.

Of course, having no home to be responsible for, and for me, no one to answer to or look after, opens up possibilities for enormous freedom.

For me, it comes down to weighing freedom versus security. It doesn’t have to be an either-or thing. It can be both-and. I advise anyone considering a nomadic lifestyle to consider the challenges of the lack of community. It can take years to develop or re-create community. And so for many, it might be wise to not just “show up” somewhere and expect to feel right at home, and realize the importance of really putting yourself out there to make friends.

For some, this may also mean that having a home base to launch from on long “pilgrimages” may be preferable to trying to create a series of short-term launch pads. But in it all, keep in mind that, as far as we know, we have one life. Live it how you want; don’t waste time, but don’t stress about it either. We are so privileged to live on this beautiful planet at this time, and there are no rules on how you can enjoy it. Don’t let others impose on how you “should” live, and try not to impose “shoulds” on yourself. If you want to jump off the cliff and fly… jump! Go for it! If you have a subconscious need for permission… here… you have it. Now, go!

One month in a semi-familiar place. I’ve been in many, many places for just a day. Maybe it’s an age thing, but I’m finding that, rather just being able to say, “Been there, done that,” I like to have plenty of time to really dig into a place. To let myself settle into the environment. One day may let me see the sights, but like people, there is so much more to a place than immediate outward appearances.

Thanks for sharing your story, Dave!

Have any questions for Dave? Does his story resonate with your own Nomadtopia dreams? Share in the comments below.