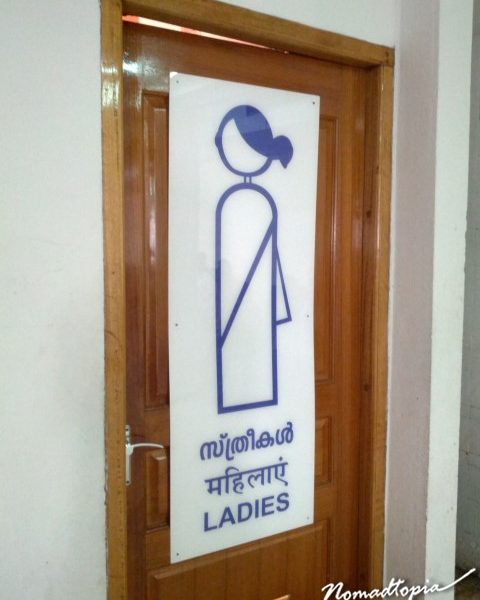 April 12, 2014 | Inside Nomadtopia, Nomad Life, Photos, Story behind the photo

I’m going to share more pictures here on Nomadtopia, along with the story behind the picture. Today, I’m sharing a picture from India.

It’s not the best picture, but I took it because I thought this sign, on a bathroom door at the airport in Thiruvananthapuram, the capital of Kerala, India, was interesting for a number of reasons:

It’s an unusual experience to travel within one country and experience different languages (not to mention different alphabets!) in different regions.

English is widely spoken in India, thankfully, and Hindi is also spoken by a wide swath of the population, but everywhere you go, you’ll also encounter people speaking the local languages.

To the untrained ear, it takes a little effort to notice the differences between them, but I found that usually, if I paid close attention, I could at least tell if someone was speaking Hindi or something else.

The driver who took us from the city of Cochin to the backwaters in Kerala talked on his cell phone almost the whole way, so we got quite an earful of Malayalam from him. (Now I wish I had recorded him speaking so I could share that with you too!)

I love all the different scripts, too. As soon as we arrived in the south I noticed the difference; Malayalam doesn’t have that horizontal line you see in Hindi, and it’s a more voluptuous script. (I never thought I’d call a script “voluptuous,” but it’s an apt description, don’t you think?)

The day I took this photo, we (me, my brother, and my husband Roberto) had gotten up early so we could go enjoy a little quiet time and have breakfast by the beach in Varkala before we headed to the airport for our flight to Mumbai.

The driver had insisted on picking us up earlier than we wanted to leave, so we got to the airport with plenty of time to spare. We had an interesting moment while trying to make copies of our passports at a little shop in the airport; they also sold coffee there, and there was a little confusion about whether we wanted coffee or copies (or both!).

We enjoyed train travel in India (and also took a few buses up north, though I can’t say I particularly enjoyed them!), but the country is so huge that sometimes it makes more sense to fly, especially if time is tight.

We were near the southernmost tip of India, and it would have been at least 24 hours to Mumbai by train. My brother had just a few days left in India and we wanted to spend some time in Mumbai before his flight home. (We ended up spending the next day as extras on a Bollywood set, but that’s a story for another day!) 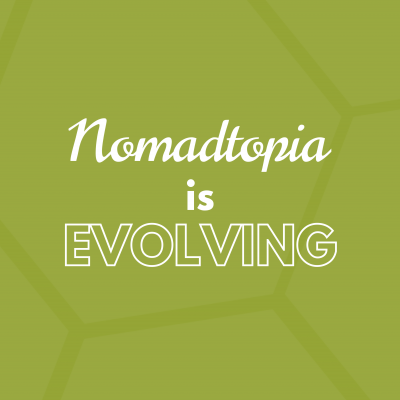 5 Strategies to Get Work Done While Enjoying Where You Are 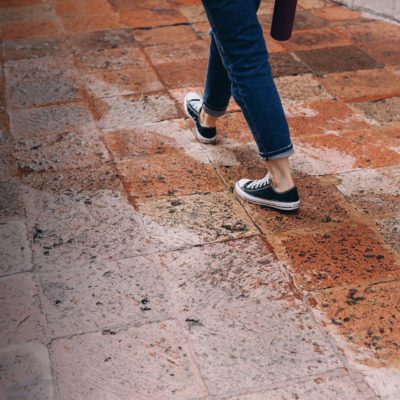